de Lacy Chronicles Norsemen to de Lacy Barons
After William became King of England, FitzOsbern was made an earl, with major land holdings in Gloucestershire, Herefordshire, Oxfordshire, and the Isle of Wight, a relative and close counsellor of William the Conqueror and one of the great magnates of early Norman England. FitzOsbern was created Earl of Hereford in 1067, one of the first peerage titles in the English peerage. He is one of the very few proven companions of William the Conqueror known to have fought at the Battle of Hastings in 1066. His chief residence was Carisbrooke Castle on the Isle of Wight In the summer of 1067, King William returned to Normandy and left in his absence his half-brother, Bishop Odo of Bayeux and Lord FitzOsbern, in charge of England.

Marcher powers were distinct in several ways:  they had special privileges which separated them from the usual English lordships. Royal writ did not work in the Marches: Marcher lords ruled their lands by their own law, whereas in England, fief-holders were directly accountable to the king. Marcher lords could build castles, a jealously guarded and easily revoked Royal privilege in England. Marcher lords administered their own sheriffs. Sitting in their own courts, they had jurisdiction over all cases at law save high treason. "They could establish forests and forest laws, declare and wage war, establish boroughs, and grant extensive charters of liberties. They could confiscate the estates of traitors and felons. They could establish and preside over their own petty parliaments and county courts. Finally, they could claim any and every feudal due, aid, grant, and relief" Feudal social structures, which were never fully established in England, took root in the Marches, which was not legally part of the realm of England.

The de Lacy family were now truly Marcher Warlords!
Introduction to the five de Lacy Barons of Weobley. Learn more in the de Lacy Chronicles book​
Baron Walter de Lacy, 1st Marsher Lord of Weobley.
​Walter de Lacy kept a large number of his manors in demesne, managing them directly rather than giving them as fiefs to his knightly followers. Some of these lands in Hereford, including Holme Lacy, were held of the Bishop of Hereford as a tenant. While Walter built and improved the estate, his son Roger built a strong army of knights, soldiers including Welsh mercenaries. It was Roger who planned the military strategy. Walter died March 1084, having fallen from scaffolding while inspecting the building of St Guthlac’s Priory. He was laid to rest at Gloucester Abbey (now Cathedral). In total, Domesday Book records show Walters lands as being worth £423 in income per year and as comprising 163 manors in 7 different counties. In addition to his estates in Normandy. He was one of the richest men in England. 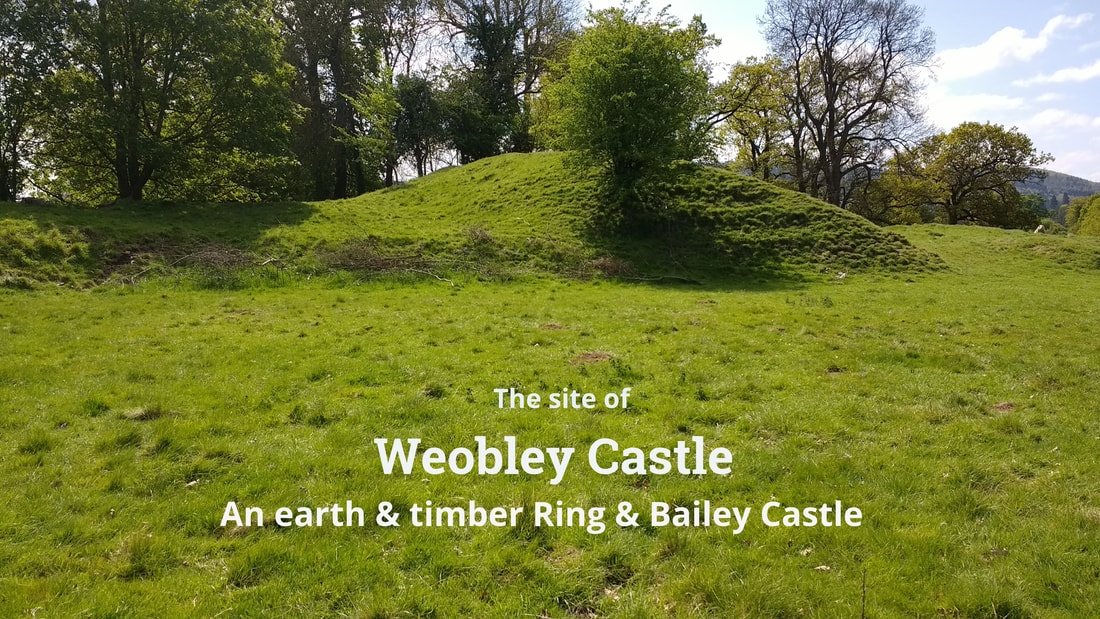 Baron Roger de Lacy 2nd Marcher Lord of Weobley
Baron Roger de Lacy, the 2nd Lord of Weobley from 1085. Roger de Lacy maintained Weobley, adding Mott and Bailey castles throughout the Welsh Marches area. Notably Longtown and Ludlow. Roger masterminded the de Lacy tactics of Welsh border control, leading his Knights and soldiers and even adding Welsh soldiers to his ranks in skirmishes and minor battles.
King William left his third-born son William Rufus as King of England on his death. Baron Roger de Lacy rebelled and tried to overthrow William Rufus and install William's firstborn Robert Duke of Normandy as King of England. The rebellion failed, and Baron Roger was exiled to his Normandy estates, and Roger de Lacy died there in 1106. Roger's lands, including some 96 lordships, were given by the King to Roger's brother Hugh de Lacy.
Baron Hugh de Lacy 3rd Marcher Lord of Weobley
Hugh de Lacy was the second son of Walter de Lacy and was born in 1073. In 1096 The vast territories controlled by Roger de Lacy, sent into exile, now passed to his brother Hugh becoming the third Baron of Weobley. Hugh continued to uphold the de Lacy’s estates without controversy or historical note. Hugh died in 1121 without issue. Walter de Lacy’s third and youngest son Walter had, at an early age and dismissed himself from estate duties. He became abbot of Gloucester Abbey in 1130 until his death in 1139. Gloucester Abbey is now, Gloucester Cathedral.
Baron Gilbert de Lacy 4th Marcher Lord of Weobley

The inheritance passed but not without controversy in 1131 to Hugh’s nephew, Gilbert, the son of exiled Baron Roger de Lacy. He had returned from Normandy to win back the Lordship and Estates of Weobley. To further his campaign, Gilbert had been a regular attendant at the court of King Stephen, but in about 1137, he changed his allegiance from Stephen to his rival for the throne of England, Empress Matilda.
In 1158, Gilbert de Lacy resigned his lands to his eldest son Robert and joined the Knights Templar, travelling first to France and then to Jerusalem, which he reached in 1161 or 1162. He became preceptor of the Templars in ‘the county of Tripoli’, and in 1163 he is said to have been among the leaders of a Crusader army resisting Nur-ad-Din. The year of his death is not known. Robert, his son, had already died without children sometime before 1162, so  Gilbert de Lacy’s younger son Hugh de Lacy now inherited the lands. 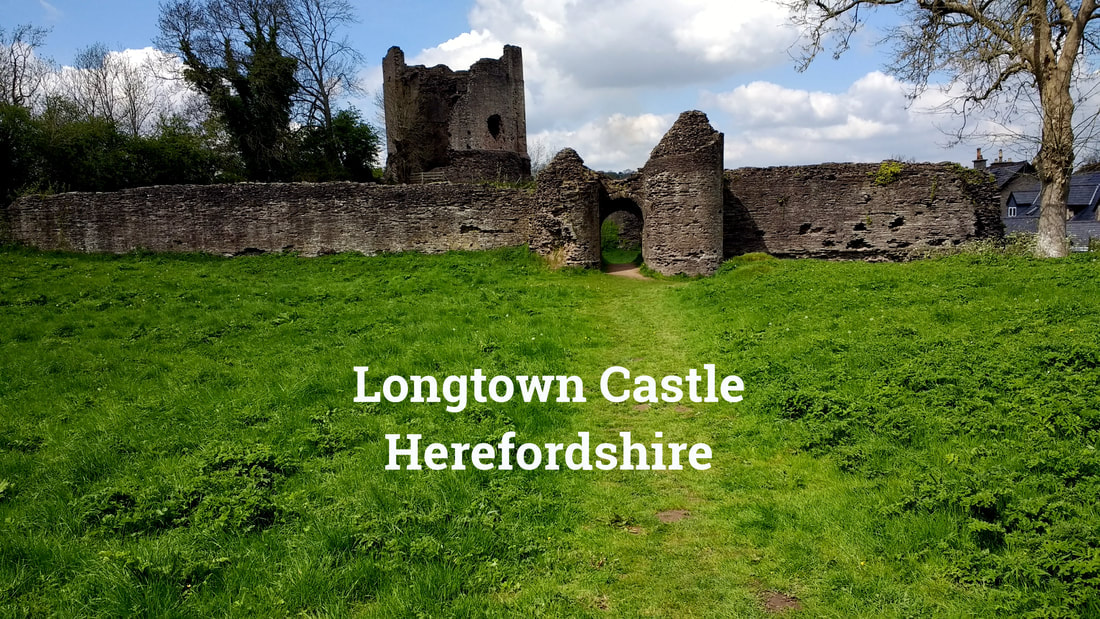 For more information, Directions and Opening Times.
​Tap or Click to visit English Heritage Longtown Castle Page
Baron Hugh de Lacy 5th Marcher Lord of Weobley, Lord of Ludlow
Without holding the title, Hugh took complete control of the estates until the death of his Crusader father, Gilbert de Lacy. He restored land lost to local Welsh chiefs and other Marcher Lords. Then commenced the rebuilding of Longtown and Ludlow Castles. He improved the yields and wealth of the manors. King Henry II returned Hugh the long-suppressed title of Lord Weobley. He additionally appointed Hugh de Lacy as Lord of Ludlow.
Hugh became one of the most powerful Marcher War Lords. Not since the days of his Grandfather, Roger de Lacy, had the name of de Lacy held more fear or respect in the West of England from Anglo-Normans and Welsh alike.
Later, Hugh was summoned by the King to accompany him on an expedition to Ireland. On the expected success of the invasion, Hugh would take up residence as the King's Viceroy in Ireland. Hugh, always ambitious, was delighted to accept. The history continues...... 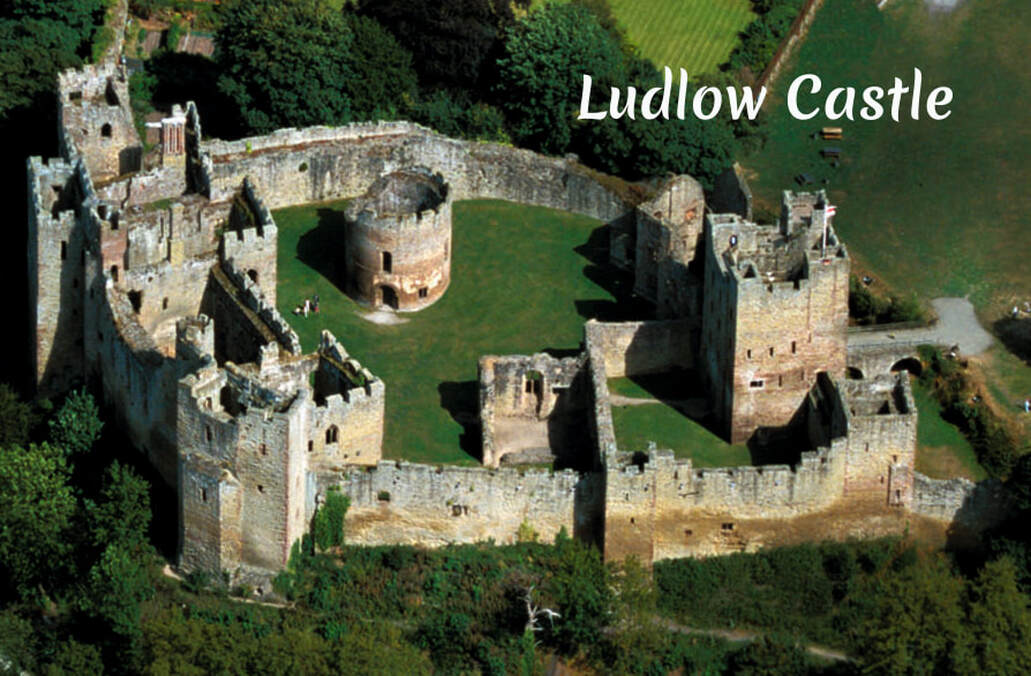 Tap or click for the Ludlow Castle website.
​More history, Visiting times and Events.
Baron Walter (II) de Lacy 6th Marcher Lord of Weobley,
Lord of Ludlow and Lord of Meath
Walter still a minor did not succeed to his father's estates until 1188. Taking possession as Lord of Ludlow and Meath, after considerable political and personal argument and cost with not one, but two Kings. Walter, married Margaret, the daughter of William de Braose the 4th Lord of Bramber. Who had significant estates and power on the Welsh border and Ireland, The downside of the relationship was the King’s suspicions of powerful Marcher Lords allying their holdings in Ireland, and the Welsh England border. The King's fear of loss of control was further reinforced by the familys merging their interests. Again in 1197, Walter had to make further payments to King Richard. This time to try to re-recover his Normandy and English lands. The King had sequestrated both. Because the de Lacy, de Braose connection appeared to King Richard, to be too strong. Walter possibly seen the weaker of the two lords. By 1215, King John was desperately seeking support from Ireland, against the growing rebellion of Barons throughout England, ending with King John signing the Magna Carta. King John having first exacted a further hefty financial penalty from Walter de Lacy, promised the return of all his lands for this support.
With Walter trying to improve the dwindling incomes from the Ewyas Lacy estates that had fallen desperately low due to his poor stewardship and the Kings fines had reduced Walters overall income. Walter had become an absent landlord at Weobley and Longtown as he now was expected to attend more frequently, King John's depleted court, his debts finally caught up with him, and on 19th November 1240, the Crown issued orders for the restraint of his estates to recover those debts.Walter died on the 24th February 1241 in Meath, Ireland. He was blind, feeble, bankrupt and without a male heir. A sad ending for a man, and a family line that had shaped and ruled both the Welsh Marches, and Ireland.

​​Since the days when Rollo signed an oath with King Phillip of France pledging he and his followers would renounce all Pagan faiths and convert to Christianity.
The families of Normandy including the de Lacy's became devout Christian followers.
Their religion based on a mix of fear and favour. Christian support to the church was given as much on expectations of reward not only in heaven but also here on earth. The fear of hell (and the incumbent Pope) was never far away. Christianity in the middle ages was not a faith of compassion.
Walter de Lacy was no exception. He and his descendants devoted much time and money to show God and the world their devotion by building or financing the building of many churches along the Welsh border; Here, we share with you two that are the most outstanding. One the largest, the other the smallest, each with its own merits. 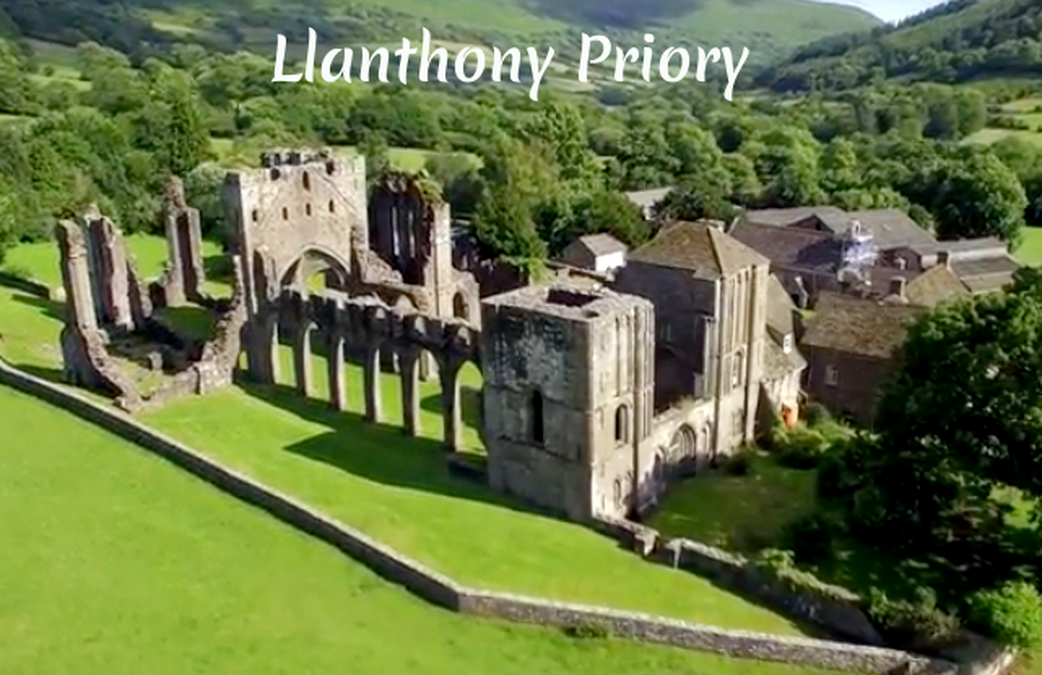 Llanthony Priory
In 1108 Walter de Lacy the third son of  Baron Walter de Lacy. was carrying out a patrol in the remote Honddu valley, situated on the opposite side of the Black Mountain to his home Castle at Longtown.  Walter, a devout young man, felt moved by the remoteness and peace surrounding the derelict Anglo Saxon Church – where St David was said to have lived as a hermit – he sought the permission of his Farther to forsake the world and his life as a soldier and become a hermit there himself. Later he was joined by Ernisius, former chaplain to Queen Matilda wife of Henry I, together they were persuaded to set up an Augustinian Priory
The very remoteness of the site laid the growing monastery open to frequent attack by Welsh bandits. Reluctantly the monks left the valley for the safety of Glouster Priory. The 4th Lord of Weobley, Baron Hugh (II) de Lacy in circa 1155 provided men, land and support to restore Llanthony Priory in the now named Vale of Ewyes. The restoration carried on for many years by Hugh and on his death in 1186 by his son Baron Walter(II) de Lacy with support and funds often coming from as far afield as Ireland. 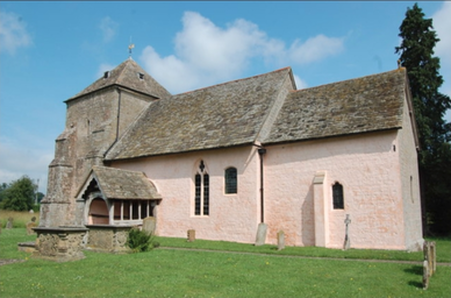 St Mary's Church at Kempley
The smallest de Lacy site to which we will pay tribute too; but possibly the most atmospheric stop on any de Lacy tour. Built in the very early 12th century by Hugh de Lacy the 3rd Baron of Weobley in memory of his father, Baron Walter.
Any personal visit, or if not possible then by using the Youtube video below will takes you back to quiet contemplation of the Norman world by the still visible wall paintings commissioned by Hugh de Lacy.
de Lacy Barons of Weobley, Ludlow and Meath (Ireland)
leading Marsher Lords
​"Some may say "War Lords"
​1068 to 1241 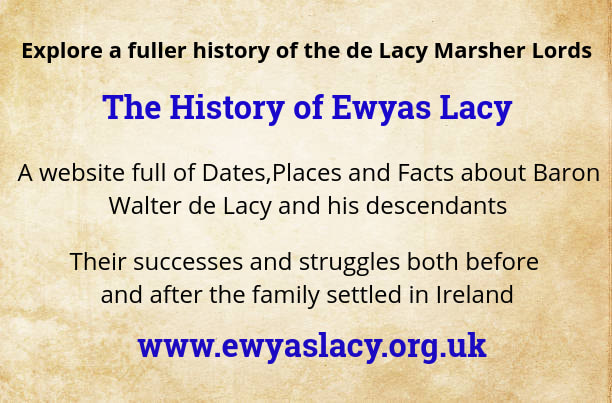 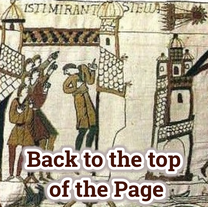