de Lacy Chronicles Norsemen to de Lacy Barons
The de Lacy Origins
Viking Norseman To Norman Barons
​There are three elements to the
Origins of the de Lacy Family
Extracts from Roy's ​Illustrated Presentation
depicting the de Lacy origins from fighting
​​Norsemen to Norman Lords
leading up to The battle of Hastings in 1066. 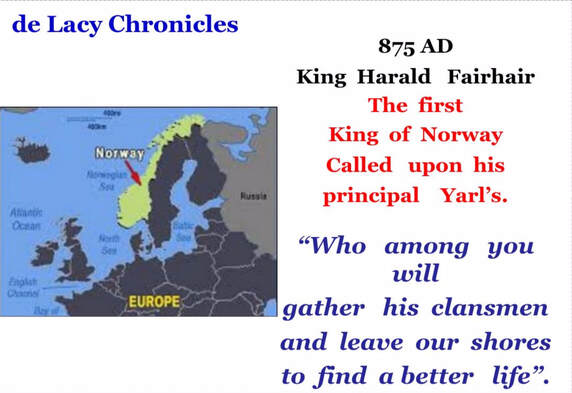 ​The ninth century was a turbulent time for Norway. To larger a population fighting over too few resources from the sparse land. Out of this chaos, Harald Fairhair on taking the throne decided that rather than fight each other those brave enough should make a fresh start beyond Norway.​ 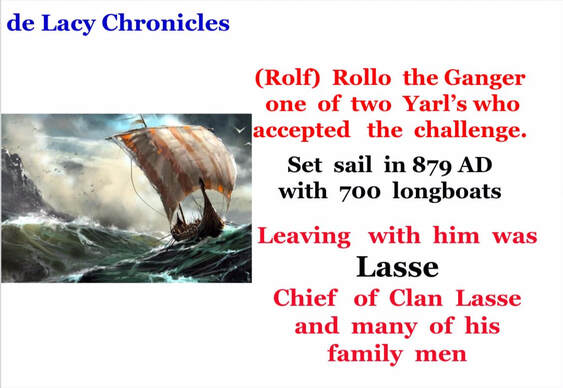 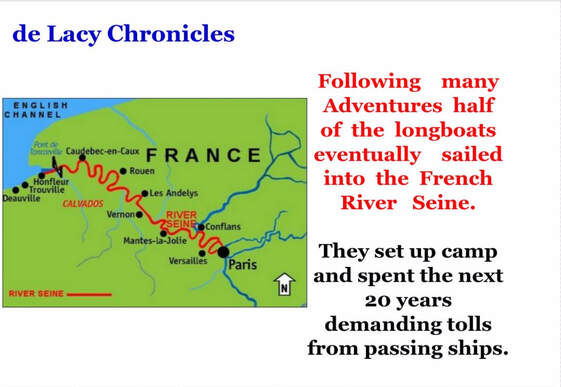 ​They sacked the French town of Rouen and sailed on up the river till they neared Paris where they found stiff resistance from the French Army. Rather than lose men, Rollo withdraws; knowing their prospect back downstream would be better. They found an ideal riverside base between the coast and Paris with high mountains either side of the river. 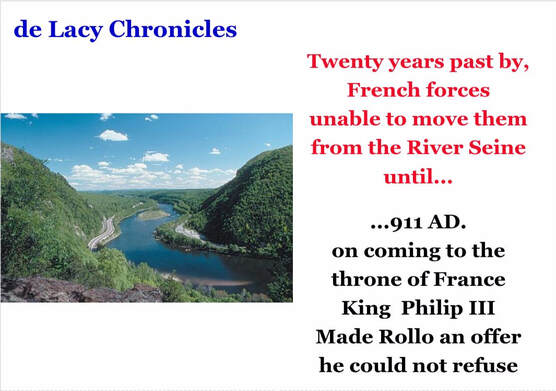 Here they were able to see all boats passing up and down the   river while guarding their own defences. All French attempts to  move them from this strong position failed. Life was good,   and they were in no hurry to move.​​ 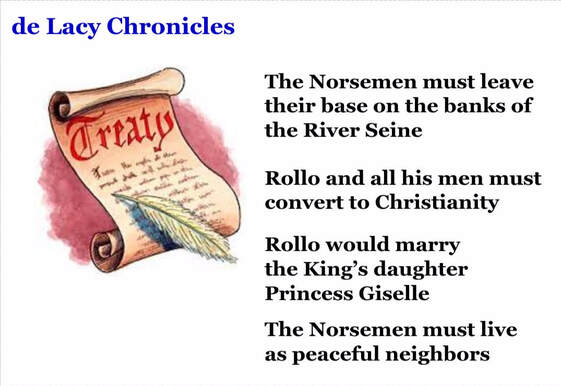 The new King, Phillip III, knew that force was not the answer   to the problem. Weighing up the costs of all French losses     from  these Norse raiders. He decided to tempt them out. 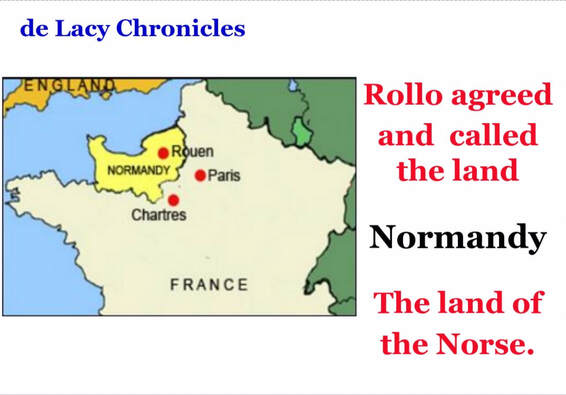 Having left, a coastal nation, the Norsemen were delighted. Here was the land that they had sailed so far from home to find. 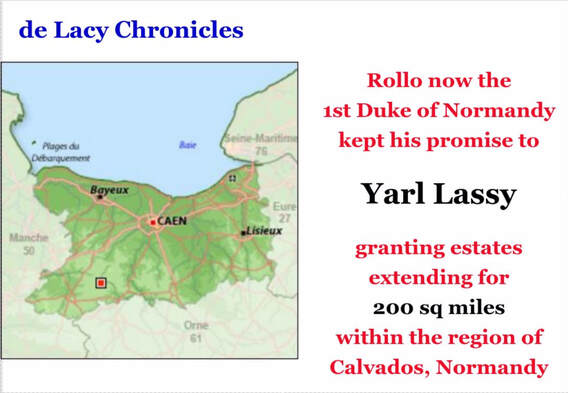 ​The Red square below donates the land Yarl Lassy, and his kinfolk were to settle and start a new life. In turn, Lassy gave Manors and farms to all who had sailed with him. 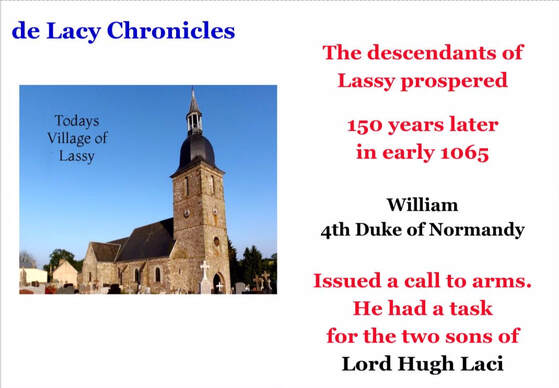 The area was fertile farmland, and the Lassy Kinsmen prospered. They followed Rollo's lead and married local French girls. Adapting the men, into a more civilised French way of life. The name Lassy gave way to a mix of French/Latin to become Lassi and then de Lacy 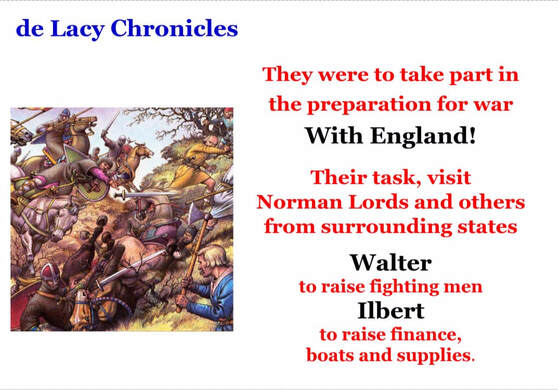 William, the Duke of Normandy, had been promised the Throne of England by the childless Edward the Confessor, his first cousin once removed. However, on Edwards death, the Throne of England was taken by ​the powerful English Earl Harold Godwinson. William was determined to go to war to gain what he thought was due to him. 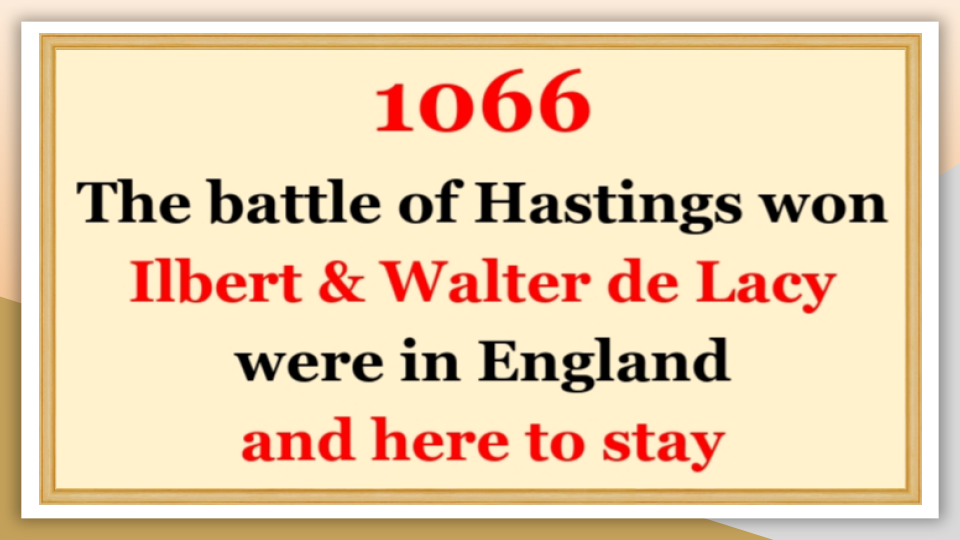 ​To continue the story of Ilbert de Lacy and his dependants go now to the ​'Pontefract and Politics'. You can find all about Walter de Lacy and his son Roger on the 'Marcher War Lord's' page 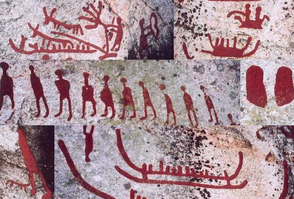 ​Finally, for anyone who wishes to research deeper into the Lasse, history
​ dispelling some of their origin myths. Were the Lacy's Norman or Franks?   Was Lasse the ancient name of the de Lacy's?
Was the village of Lassy in Calvados there long before the de Lacy Family?​ 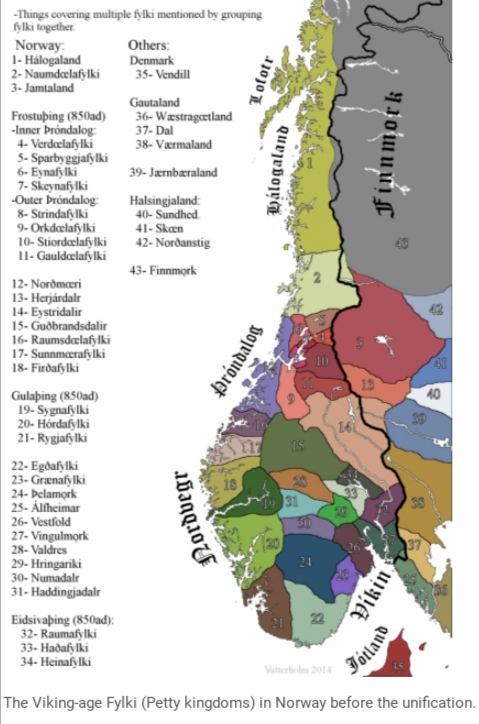 An in-depth look at the de Lacy origin


Ninth Century Norway comprised many small kingdoms crowded upon the Western and Southern Coast with constant feuds and bitter fighting between Clans (Tribes) for fishing or farming land. The primary source of food was fish from the Fiord inlets or the open sea. The Norse people became adept fisherman tackling the stormy Norwegian Seas. From their mastery of the waters, came a whole new era. The development of the Longboat.

Following bitter fighting over land, safe harbours and best fishing areas. War-torn Norway in 872AD found peace following the crowning of King Harald Fairhead as the first high King to rule over all of Norway. Over the next two years, he developed his plan for the betterment of Norway. Then in 875AD, he called together his chief Jarl’s.
--------------------------
Rollo The Ganger. Jarl Gaange Rolf. c. 860–c. 930 AD
A Jarl was an aristocrat of Norwegian society, a title gained from power some were even past kings. If there was wealth, the Jarls held most of it. They soon realised that the longboat could be a weapon of war. To them, wealth came not only from Norwegian land but from trading Silver and Slaves their Longboats took them to find both. A single foray to a European coast could be worth more to the Jarl and his men than all the farming and fishing for a whole year. A Jarl within the region he controlled offered protection and security to the smaller clans who had sworn allegiance to him.

The next level of Norwegian medieval society was made up by the many Norsemen who belonged to the middle class, known as Karls. This included the Clan Lasse, These people were freemen and landowners. Farmers, fishermen and artisans. Extended Karl families banded together, forming a local clan living in clusters of two or more longhouses supplemented by barns and workshops. Karl clans were not necessarily rooted in one area like the Scottish clans that followed them four hundred years later. Like the Jarls but still, under their patronage, there were larger Karl clans.
The lowest level of Norway's society was the þræll (Thrall) made up of slaves and bondsmen. If a Norseman of any class, could not pay his debts, he had to become a bondsman and work for the lender until they paid the debt. However, the three social levels were not as rigid as in other parts of Europe. Mechanisms existed so that a person could move from one class to another. There was poorer Jarls and richer Karls. I know of no history where Karl Lasse was placed between the first two classes other than he owed allegiance to Rollo
The Lacy family had been granted 200 sq miles of land (128,000 acres) to be held by the Norman law of Parage the area to be known as Lassy also known as the Lacicu Latius estates in the county of Calvados. It also linked Vire with Lassy being only 20kms away, well within the land grant. On receiving their lands the descendants and extended family of Karl Lasse also followed the pattern of taking Frankish brides, adapting to the rules of the Catholic church to become prosperous Norman landowners. Their prosperity gained them further estates in and around Normandy. By, the fourth generation we arrive at Hugh de Laci now Lord of Lassy. Father of our two de Lacy brothers. The Elder Ilbert de Lacy and younger (half brother?) Gauthier or anglicised as Walter. Under Norman feudal laws the de Lacy family were under-lords to the Bishop of Beaux. However, Walter became an under lord to William FitzOsbern cousin to Duke William. Two explanations are Walter was managing new distant de Lacy estates or by marriage into the FitzOsbern family either could bring about a change of tutelage.
The research used to collect this version of the early origins of the de Lacy family follows the most accepted history. Credible knowledge is hard to find before the tenth century, Often vague, leading to facts relating beyond royal or paple records being only monastery hearsay or folklore. In this environment,  not surprising historians or researchers will sometime offer alternative origins. Here within this website. Within my de Lacy book.   Or the popular “de Lacy Chronicles” Facebook page my research “The Origins” has on occasions been challenged at best as containing incorrect facts, at worst as a nice piece of fiction. My project this year was to dig even deeper and wider to at least show the merit of the version I use. ​​ 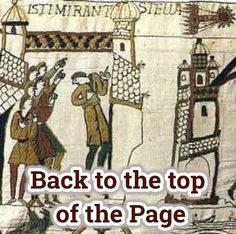