de Lacy Chronicles Norsemen to de Lacy Barons
As they say, "Every picture tells a story".
Behind every image is more information about the person
Our thanks to Wikipedia, where most come from.
​ 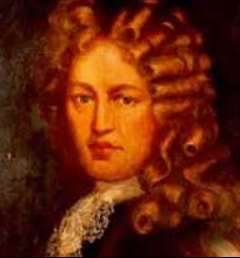 Click or Tap for a link to General Sarsfield from Wikipedia.
Patrick Sarsfield, 1st Earl of Lucan
General Sarsfield, the Irish commander of Limerick Castle, confronted with both starving Irish forces and citizens within the walls of Limerick, demanded overall command from the two French officers who had allowed the massacre of friendly Irish troops led by Gen Piers de Lacy.
Sarsfield considered the time was right to accept General van Ginkel's terms of an honourable surrender. The conditions had been improved and would include all the besieged soldiers and the citizens of Limerick. 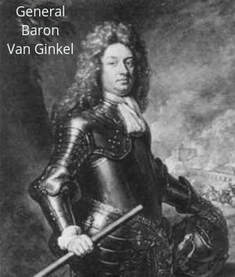 Tap or click for more facts about General Van Ginkel
General Godert de Ginkell, 1st Earl of Athlone
Appointed head of the William of Orange Army  Ireland Spring 1691,
The Dutch General Van Ginkel In pardoning the soldiers,  thought he could turn the surrender even more to his advantage. The Dutchman recognised the fighting ability of the Irish soldiers and thought they might be of use to him fighting in Europe under the flag of his master. King William III of England. (William of Orange).

Two Royal standards were raised, outside the gates of Limerick. One flying the English Standard of King William of Orange. The other the colours of French King, Henry IV.  All military forces within the city received a stark choice. Stay within the walls and face execution. March out to the English Standard and secure the right to remain in Ireland as part of William of Orange’s armed forces. March to the left and the colours of King Henry IV, of France and face banishment from Ireland.

Fourteen thousand soldiers walked out of the gates. Only 1,044 lined up behind the English banner. The remaining 12,956 including the 27 Lacy's proudly marched to the French flag.
General Van Ginkel was furious; he had underestimated the Irish loathing of the English King. However, as a man of honour, he allowed the French officers to commandeer 17 boats to take the Irish soldiers into exile in France.

They did not know that the boy Peter de Lacy who they jeered at was to become
a Field Marshall that changed the face of Europe.
France from 1701 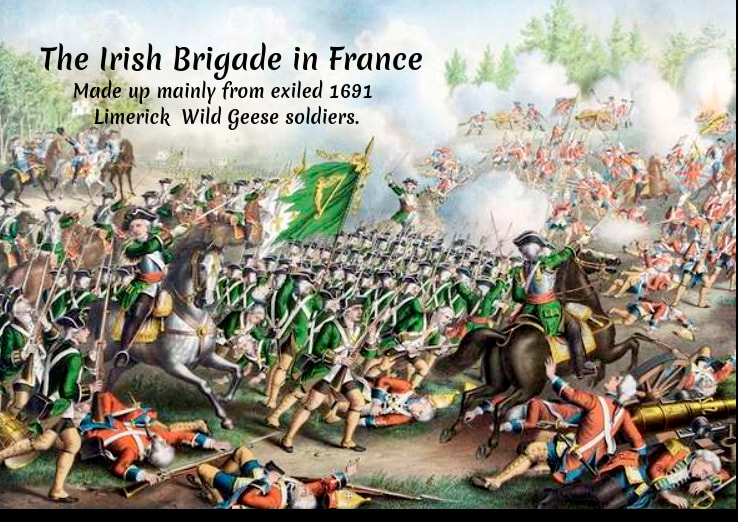 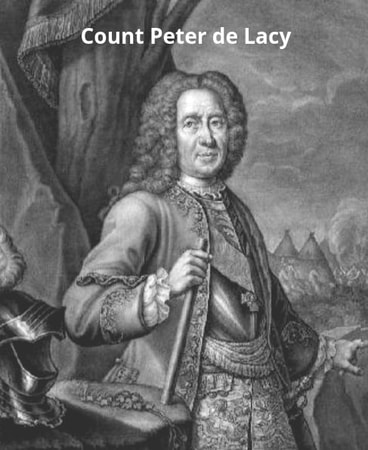 Tap or Click image for the remarkable Peter de Lacy Story
Count Peter de Lacy
Field Marshall, Supreme Head of the Russian Army. Governor of Livonia.
1678 – 1751   A claimant of direct descent from William Gorm de Lacy ​
Exiled to France 13-year-old, Peter (the ragged boy), his brother, and his father all enrolled in the Irish Brigade of France
They were soon fighting in the Nine Year War of 1692 and fought at the Battle of Marsaglia near Turin. The French casualties included Peter's father and brother, who died in the first formalised bayonet charge. Peter was now encouraged by his commander Charles de Croy, to join with him in changing to the Russian Army.

Invited to the Coronation ceremony of Catherine I in 1724, Peter de Lacy was delighted that he had a place of Honour. In the same year, he celebrated his marriage to Countess Martha Philippina von Loeser. In 1725, their son Franz Moritz was born in St Petersburg. Peter now became General-in-Chief of Infantry and was decorated with the Order of St. Alexander Newsky. In Poland in October 1733, he entered Warsaw with thirty thousand men to establish Augustus of Saxony as the King in opposition to King Stanislaw. the Emperor awarded Peter de Lacy with the patent of Field Marshal.

In 1741 Peter de Lacy received the supreme Russian command in the war against Sweden, from which he emerged victoriously. Once peace was declared, throughout Russia news spread with this message
"It was Marshal de Lacy who taught the Muscovites to beat the King of Sweden and from being the worst in Europe to become the best soldiers in Europe."

Marshal Peter de Lacy retired from public life passing his remaining years on his estates in Livonia. He remained active as the Governor Of Riga till he died at Riga on May 11th, 1751; for a fortnight, the bells tolled while the city and province were in deep mourning for their beloved Governor. Peter de Lacy was the first of many “wild geese” to be ennobled for their services to European countries
Italy 1693
Colonel James de Lacy
JAMES DE LACY was born at Ballingarry, of the family of Ballingarry-Lacy.
He was colonel and commandant of the Prince of Wales regiment of infantry in Ireland during the Jacobite war. He entered the French service as part of the Irish Brigade but was mortally wounded at the battle of Marsaglia in Italy under the command of Marshal de Catinat in 1693
​
Austria 1725 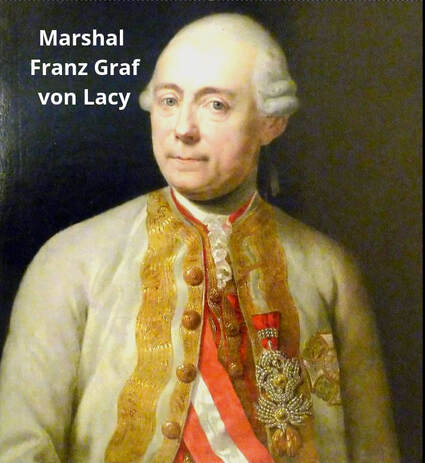 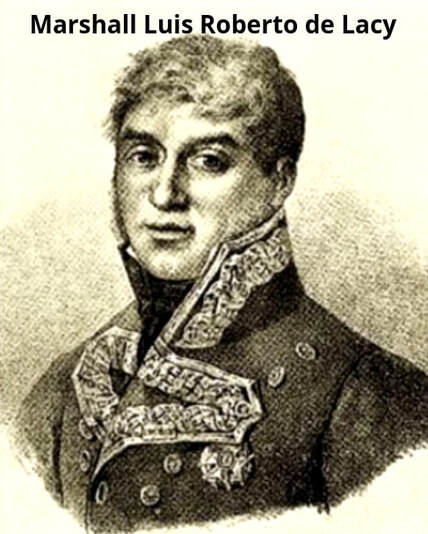 Tap or click for more information about Field Marshall Luis de Lacy
Field Marshall Luis Roberto de Lacy
Born; 1772, San Roque, Nr Cadiz
Hero of Spain    ​
Field Marshall Luis Roberto de Lacy Born; 1772,  Died 1817, Palma, Majorca. Luis Roberto de Lacy was the only child of Spanish-born Patrick de Lacy Jr. Patrick had risen to be a Lieutenant Colonel before his all too early death. Better known, was his Grandfather General Patrick de Lacy Sr. An original Irish ‘Wild Geese’ Patriot from Limerick. During 1791 now an Infantry Captain in the Spanish "Irish Regiment" of Ultonia, Louis received a posting to the Western Pyrenees. There he distinguished himself fighting against the French. Later as a Colonel, Luis had command of the coastal Cadiz region. In the summer of that year, Cádiz was being besieged, by the French, Luis de Lacy undertook a radical approach to confronting the enemy. A fleet of ships was, requisitioned. Luis de Lacy filled them with infantrymen. Forming a coastal army able to attack the French from the rear before retreating to the boats. In fact a forerunner of a modern day marine army.
With the Peninsular war at a stalemate, during August 1811, Luis Roberto de Lacy decided to break out of the pattern of fighting to defend Spanish towns and cities. Using his gorilla trained forces, Luis de Lacy turned the tables on Napoleon by making retaliatory attacks into France. Following his death, a public funeral was held King Ferdinand VII himself, attended recognising Luis de Lacy as a Spanish war hero. The King posthumously created Luis as Duke of Ultonia. You can view a comprehensive history of Luis tanks to Wikipedia at https://en.wikipedia.org/wiki/Luis_de_Lacy​
From the 1600's Wild Geese Irish brigades were involved in most European wars
Not all Irish de Lacy's descended from the 'Flight of the Wild Geese'. 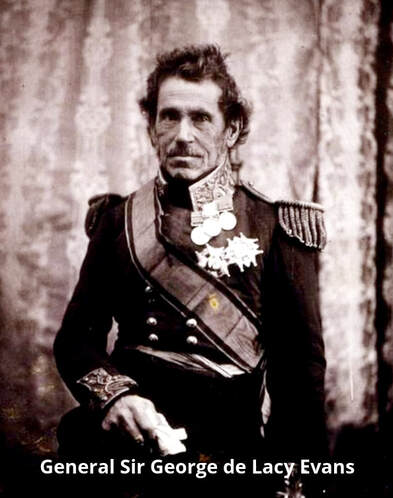 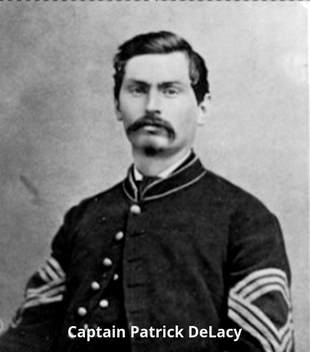 Tap or click for a full background including videos etc. about Patrick DeLacy
Captain Patrick DeLacy
Medal of Honor,
The Battle of the Wilderness, Virginia May 1864.
​(November 25, 1835 – April 27, 1915)
As they say, "Every picture tells a story".
Behind every image is more information about the person
Our thanks to Wikipedia, where most come from.