​Image above with thanks to Irish Heritage this link opens their web site
Passage to Ireland​
Henry II received in 1155 a letter and a ring from Pope Adrian IV granting the English King lordship of Ireland. Some years later, Dermot MacMurragh, the ousted King of Leinster, came from Ireland seeking help to regain his crown. King. Several Anglo-Normans Barons, led by Marcher Lord, Richard de Clare, Earl of Pembroke, known as “Strongbow”, agreed to help.  Once in Ireland, the Anglo-Normans, aided by Welsh mercenaries, quickly seized Leinster and conquered the territories of Dublin, Waterford, and Wexford. Dermot MacMurrage, now reinstated, promised Strongbow, his daughter Aoife in marriage, together with the Kingdom of Leinster upon MacMurrage’s death. He hoped to keep Strongbow in Ireland. With little prospects in England, Strongbow accepted.

​In May 1171. King Dermot died, and Strongbow was crowned King Richard of Leinster. When word got back to King Henry of England, was furious that Strongbow was now in a position of power to rival his authority as King.
King Henry exercised the symbol of investiture from Pope Adrian IV to subject Ireland to English rule. He requested Hugh de Lacy accompany him in the Invasion, and once Ireland fell, Hugh would become The King's 1st Viceroy of Ireland. In 1172 King Henry II granted the unconquered kingdom of Meath and fifty of his knights to Hugh de Lacy. On his investiture, Baron Hugh de Lacy Lord of Meath became the custodian of Dublin Castle, the official residence of the Viceroy. 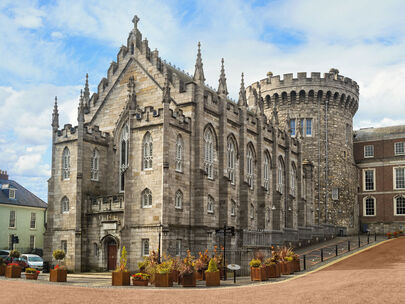 Hugh rarely returned to his Marcher estates. Together with the retained Weobley and Longtown Castle and the newer Ludlow Castle, Hugh considered his Welsh-English borders well protected. Trim castle became the centre of Norman administration for the Lordship of Meath.
As governor of Ireland, Hugh ensured the security of Meath andLeinster. He had carved out a solid foundation for the Lacy family in Ireland. Meath was now highly productive, filling many of his cargo ships with grain to sell throughout England and Europe. Hugh introduced the Norman feudal manorial system into Meath. The income was vast, primarily going to Hugh's coffers or those who had the tenancy of a Meath Manor. The Irish peasants saw little of it! Hughe’s first wife, Rohese, mother of sons Walter and Hugh, died before 1180. In 1181, without the King's permission, Hugh re-married to Princess Rose Ní Conchobair, daughter of the deposed High King of Ireland, Ruaidrí Ua Conchobair. King Henry II never recognised the marriage, but the significance of the wedding caused concern. King Henry had not forgotten the marriage without his permission of Strongbow in 1171. Hugh and Rose had two children, a son and a daughter: William Gorm and Ysota. Both were declared illegitimate by Henry II  but not by the church. While visiting the construction of a castle at Durrow in 1186, Hugh de Lacy was murdered by the local Irish chief, Gilla-Gan-Mathiar O'Maidhaigh, who severed Hughes' head with a sword blow.
Trim Castle
The first and the most important de Lacy Irish power base. 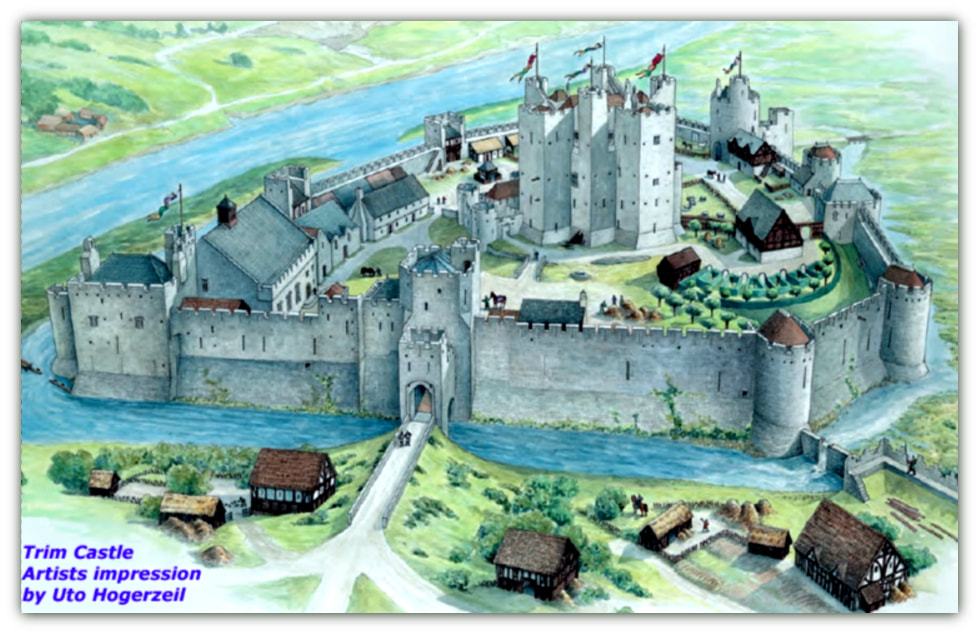 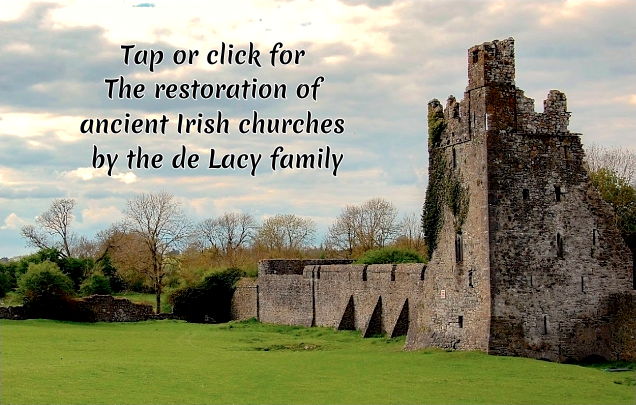 Baron Walter de Lacy.
1176-1241
5th Lord of Weobley,2nd Lord of Ludlow 2nd Lord of Meath.
Walter, still a minor, did not succeed in his inheritance until 1188. He was forced to pay heavy taxes to King Richard to release the titles and estates after over ten years of considerable political and personal argument and cost with not one but two Kings. Walter married Margaret, the daughter of William de Braose, the 4th Lord of Bramber. They also had  powerful estates on the Welsh border and Ireland, Feeding the King’s suspicions of powerful Marcher Lords allying their holdings together. When de Braose inherited other English estates on his behalf, Walter agreed to govern Meath and Limerick for his father-in-law, both from Limerick castle. Led again to King John seizing Trim and the Meath estates. 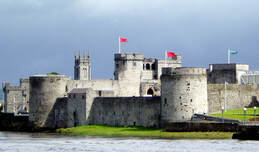 Limerick Castle (King Johns)
By 1215, King John was desperately seeking support from Ireland against the growing rebellion of Barons throughout England, ending with King John signing the Magna Carta. Having first seized a hefty financial penalty from Walter de Lacy, King John promised the return of all his lands for Walter's support. Walter was trying to improve the dwindling incomes from the Ewyas Lacy estates that had fallen desperately low due to his poor stewardship. The King's fines had reduced Walters's overall revenue. Walter had become an absent landlord at Weobley and Longtown as he was now expected to attend King John's depleted court more frequently. Walters's debts finally caught up with him, and on 19th November 1240, the Crown issued orders for the restraint of his estates to recover those debts. Walter died on the 24th of February 1241 in Meath, Ireland. He was blind, feeble, bankrupt and without a male heir.
Dundrum Castle, Dundrum County Down.
Home of Hugh de Lacy Earl of Ulster
Hugh de Lacy 1st Earl of Ulster
1176 - 1243
Born Weobley Castle Ewyas Lacy, Hertfordshire. The Second son of Hugh de Lacy Lord of Meath.
Hugh was appointed by King Richard as a coadjutor (Principal aide) to Baron  John de Courcy in Leinster and Munster. The post proved to be a disaster as bitter rivalry had broken out between them. Hugh disagreed with de Courcy's ambitions. John de Courcy assembled a personal army and swept through Northern Ireland invading and taking Irish Kingdoms. Without the permission of Prince John the  Lord of Ireland. Prince. Upon being crowned; King John was enraged to discover that John de Courcy had authorised the issue of new coins into Ulster. One side depicts St Patrick the other, the head of de Courcy. This act was seen by King John, as treason. In 1199, King John gave Hugh de Lacy the authority and resources, to raise an army and wage war on John de Courcy. Hugh de Lacy led a raiding force into Lecale and attacked, de Courcy in Downpatrick. Hugh had proved himself a capable leader and by 1204 had defeated John de Courcy, taking occupation of all his lands in Northern Ireland. King John had de Courcy sent into exile. Elevating Hugh de Lacy to Earl of Ulster.
Over the following 20 years, Hugh's attitude to the crown hardened and he allied himself with the powerful Irish O’Neill family past Kings of Northern Ireland who were still antagonistic towards English rule.In 1230, Hugh de Lacy joined with Richard Mór de Burgh to subdue Aedh mac Ruaidri Ó Conchobair, the Irish King of Connacht. Richard de Burgh later became the 1st Baron of Connacht.Following the death of his estranged first wife. Hugh de Lacy then re-married Emmeline de Riddlesford, the daughter of Walter de Riddlesford about 1242. Hugh de Lacy died one year later in 1243. With still no heir from either marriage. The earldom became extinct, and the Hugh de Lacy estates reverted to the crown.
Carlingford Castle,
Built in the late 12th century by Hugh de Lacy Lord of Meath.

William Gorm de Lacy
Half Brother to Walter & Hugh
1180 - c.1234
Longtown Castle, Ewyas Lacy Hertfordshire
During his absence in 1215, Walter de Lacy installed his younger half-brother William Gorm as custodian of Trim Castle and the de Lacy Irish estates.By1216, Ireland was in turbulence. William Gorm de Lacy built a formidable army of Meath Knights, feared all over Southern Ireland; they were involved in fighting a succession of small Irish wars.
William added more land to the de Lacy estates by taking the castles of Dundrum and Carlingford, which before his absence in 1210  belonged to his half-brother Hugh de Lacy. Later the Kings commanded William to return the castles to the Crown.

Newly crowned King Henry III decreed that as the Lord of Meath, in July 1217, Walter de Lacy should be made to stand surety and make amends for William's excesses towards the King. William Marshall, the Earl of Pembroke, in 1224 besieged Trim Castle under the command of William Gorm de Lacy. Marshall stormed and, with some difficulty, took the castle. Only to find William Gorm de Lacy had escaped. By 1227, William Gorm was reconciled with King Henry III and, to get him out of Ireland, agreed to enter the King's service on a grant of £20 per year. His role was to fight in the King's name in Europe. By 1233, William Gorm de Lacy had returned from serving the King in his European struggles. The armies of King Henry III  regarded him as the
“chiefest champion in all of Europe”. William Gorm was immediately involved again in Irish affairs. While leading his forces in a skirmish, he was injured and died some days later sheltering in his lake castle in the Brenie (Breifne) deep in the hills of Ireland’.

William Gorms' wife Gwenllian, was a younger daughter of Llywelyn the Great, the Prince of Gwynedd, Wales. There is speculation that William Gorm and Gwenllian de Lacy had at least two sons, Thomas de Lacy and Henry de Lacy, who lived on beyond the fall of the House of de Lacy.
From 1254, there was little or no recorded history to add to the de Lacy Chronicles.
There were de Lacy's cousins since 1066 who from their Normandy de Lacy estates had followed and served Ilbert and Walter de Lacy; their decedents can still be found today in England, Ireland and beyond.
​Some carrying the title of Sir and managing their estates, but not leaving historical trails.
You can consider it was the start of today’s Worldwide Lacy Family tree
Until I unearthed the explosive story of the “de Lacys of Limerick”.
Tap or Click to Add