The Key to the North

Below we start by sharing with you, extracts from Roy's Illustrated Presentation
If you are based within the UK Postcode area 'WF' tap or click this link to find out more.
Having put down one Northumbrian rebellion. William the Conqueror knew that with this second uprising he must this time act with even more ferocity. His army was ordered to carry out the Harrying of the North. Once, the rebellion had been put down. King William and his Norman army withdrew to the South. Before doing so, he ordered
Ilbert de Lacy to ​"stay here with your men, and deafened the South".
King William had another key role for Walter de Lacy, Ilberts brother posting him to the Welsh Border.
​You can follow his story on the Marsher Lords page or within the 'de Lacy Chronicles' book​
King William instructed Ilbert de Lacy
​"stay here and defend the South"

​Ilbert and his Knights searched the whole of the higher reaches of the Humber to find the right defensive position to safeguard against an uprising moving into the South. To move a large military group and their Ox carts, any enemy would have to use Ermine Street, the old Roman Road. The lower reaches of the Humber could be guarded by an outpost armed with fire arrows they would be able to sink and destroy anyone trying to make passage by boat including an attack by Vikings coming from the sea.

The higher reaches of the Humber was all marshland caused by the many rivers draining into the Humber. The only feasible way an Army could come South was to ford the Aire at Castleford. Here then is where Ilbert de Lacy would prepare to dispatch any rebellion army. But Castleford was not suitable for a defensive castle. To the West, there was thick forest only leading to the mountains.
​Ilbert found the ideal spot two miles away.
A broad, high solid rock ridge. Here he would build his Castle now known throughout the world as
Pontefract Castle The Key to the North! 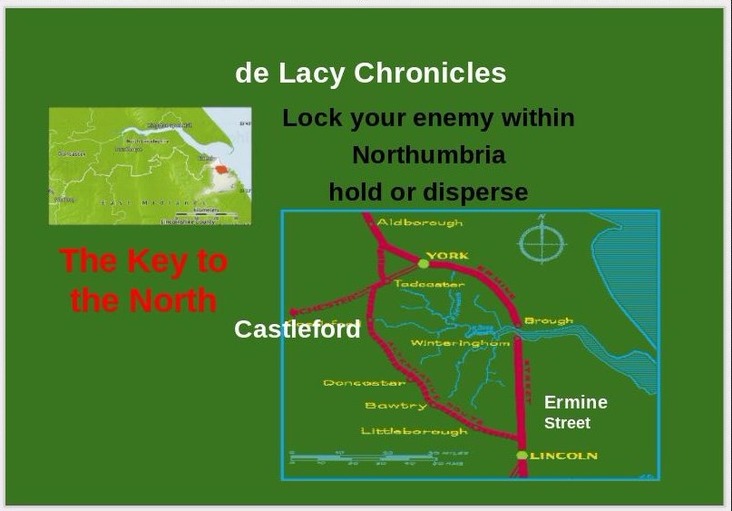 The key to the success of all Norman conquest was their strategy of quickly building Castles. Whenever possible they had been constructed upon a suitable hilltop. Often they were quickly built within two to three weeks. The Normans made use of conscripted local labour to build a simple Motte and Bailye.
Ilbert de Lacy knew that the castle he had been charged to construct would have to play a crucial role in controlling all North to South movement. Instead of looking for the nearest raised ground or suitable hill, which was the usual Norman practice. Ilbert had used his keen analytic mind to seek the perfect site to link safely York to Lincoln.​

Unlike many Norman Lords who once they had been granted land, employed a steward to collect rent while they returned to Normandy. Ilbert de Lacy visited the principle Manors occupied by Saxon Lords. He offered that on the condition of giving their allegiance to the King and Ilbert as their Lord of the Honour of Pontefract.  They agree to collect and pay taxes that Ilbert levied as their Lord. For this, Ilbert de Lacy would leave them in place to manage their own and their villager's farms.  By doing this, the Honour of Pontefract made the de Lacy family hugely rich and trouble-free.

Text copyright © Tim Midgley 2001, revised  12th October 2015. ​
The Honour of Pontefract. Tap or click to enter
​A link to the website of Tim Midgely and his history of the Pontefract de Lacy family
With thanks to Tim Midgely
Over the next hundred years Pontefract Castle 'The Key to the North' changed from earth and wood
​to a formidable stone castle which never fell to an invading force. 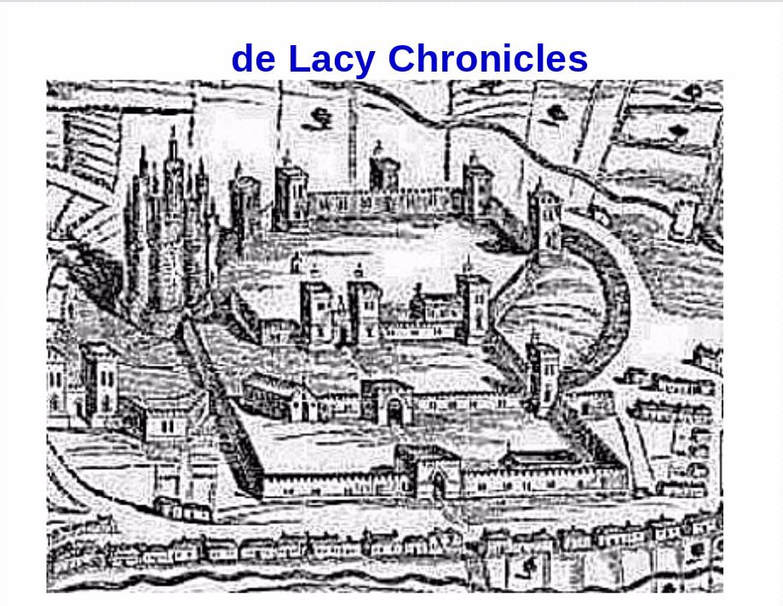 All new Norman Castles were first built, as motte-and-bailey castles.
​The de Lacy castles were no exception.
The growth of Norman conquest was enabled by establishing a succession of motte-and-bailey castles all within one day's march of each other. Most were soon abandoned, still to be found as man-made grassy mounds. Others built in more strategic places were in time re-built upon themselves, using rock as the building material. to become the magnificent ​Norman Castles (and ruins) that we can still visit to this day.