Limerick Castle
A wonderful ballad reflecting the Fall of Limerick
Reproduced here with my thanks to the composer Mike Feerick.
An Extract from an email to Roy: You might find of interest the “Ireland Reaching Out” programme – www.irelandxo.com which I started 10 years ago as a hobby to reunify the Irish Diaspora.  We have 150,000 members today and growing. It took me five years to write that song – so always pleased to hear someone likes it! 😊 Mike
​
Edited extract from the book de Lacy Chronicles
1691 General Pierce de Lacy:  With the invasion of King William III of Orange. 71-year-old General  Pierce de Lacy came out of his retirement and volunteered to lead a cavalry troop under the younger General Patrick Sarsfield, 1st Earl of Lucan.  Based at Limerick castle, had command of all the Irish forces. To General Pierce’s disgust, Patrick  Sarsfield, who had once been one of his junior subalterns dispatched Pierce de Lacy to undertake a minor role.

Ignoring Sarsfield, Pierce de Lacy left with his loyal soldiers and as many ‘irregulars’ as he could gather. They marched 16 miles South to Athlacca,  where he and his men laid in an ambush on an oncoming English regiment. General Peirce defeated then dispersed the remainder.

News of the victory spread rapidl, General de  Lacy was back fighting the English.  Following this skirmish, his forces rose to five thousand. Now formed as a guerilla army known throughout Ireland as the Rapparees, they continued to harass English forces and supply chains. Constantly melting away, after each attack to the confusion of their enemies.

General Van Ginkel, King  Williams military leader in Ireland, appointed by King Wiliam III to “finish off the Irish soldiers” on Williams behalf, now led the far more powerful Anglo-Dutch army, Followin the Boyne, Van Ginkel was now marching on Limerick. The city was under the control of Chevalier de Tessé and the Marquis d'Usson of the French army. Who commanded the French forces sent to aid the  Irish.  Even as Van Ginkel's army was advancing on  Limerick, General Pierce de Lacy's army continued to fight a rearguard action to slow their progress. Once this was no longer possible, General Peirce turned his troops and rode towards shelter behind Limericks walls. Cheers of encouragement from the Irish soldiers on the battlements of Limerick, including the 27 bearing the name Lacy, turned to cries of rage as a French officer, thinking it was an English charge, panicked and ordered the raising of the drawbridge. To the horror of the watching Irishmen on the battlements,  they saw General Pierce de Lacy and his men denied access through the Limerick walls, many of them their kinsfolk having to witness the cutting down and death by the English and Dutch Troops.

General Sarsfield, with his now depleted forces,  still within the walls of Limerick, now took over command from the French. Sarsfield considered the time was right to accept van  Ginkel's terms of an honourable surrender. The words of the surrender had been extended to include all the besieged soldiers and the citizens of Limerick.  General Van Ginkel had a plan of his own. In pardoning the soldiers, Van Ginkel thought he would turn the surrender to his advantage. The Dutchman recognised the Irish fighting ability and thought they might be of use to him fighting in Europe under KingWilliams’s (William of Orange) Dutch or English flag.

Two Royal standards were then raised beyond the main gates of Limerick. One placed to the right, flying the English Standard of King William of Orange. To the left was the colours of French King Henry IV. All military forces within the city were given a stark choice. Stay within the walls and face execution.  March out to the English Standard and receive the  right to remain in Ireland as part of Williams forces. Or march to the left and the colours of King Henry IV of France and face banishment from Ireland.  Fourteen thousand soldiers marched out of the  Limerick gates that day. Only 1,044 lined up behind the English banner. The remaining 12,956, including the 27 Lacy's, proudly marched to the French flag.

General Van Ginkel was furious; he had underestimated the Irish loathing of the English King.  He was, however, a man of honour; he allowed the  French officers to commandeer boats to take the Irish soldiers to France. The last of the outstanding de  Lacy's who had changed the face of Ireland. We're now leaving Ireland and sowing the seeds of further fame for the family throughout Europe.

Once in France they would form part of the Irish Brigade was now becoming an established division of the French Army,  They became known throughout Europe as ‘The  Flight of the Wild Geese'. Many Irishmen were later recruited onwards into other National armies all over Europe.

The picture is a link for you to the the Blog site 'Never Felt Better' where you will find a more in-depth study of 'The Siege of Limerick,'
The Treaty Stone is a rough-hewn limestone block raised on a pedestal standing across the river Shannon from King John's Castle in Limerick City. Traditionally it is said that it was on this rock that the Treaty of Limerick was signed on the 3rd of October 1691. The treaty marked the surrender of the city to the army of William of Orange. Under the terms, a promise was made to respect Catholicism, but the treaty was rejected by the English and Irish Parliaments and its terms were ignored. Thus Limerick became known as The City of the Broken Treaty.
The stone rests on a pedestal erected in May 1865 by John Rickard Tinslay, mayor of the city.
​The siege of Limerick 1961 was also a turning point for twenty-eight members of the de Lacy family. The story of the rearguard fighting nearby to Limerick by General Pierce de Lacy and his subsequent death at the closing of the gates of Limerick. That the anguished cries, from the Irish troops on the castle walls, contained the voices of 27 members of the de Lacy family. 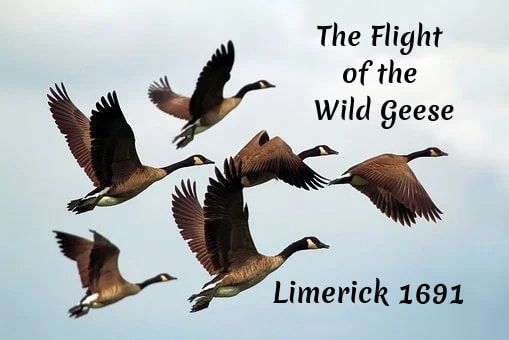